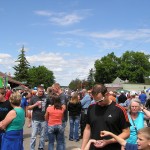 Looking south from the main street of Dorset

On Sunday, August 4, I was invited to a book signing at Sister Wolf Books in Dorset, Minnesota during the annual “Taste of Dorset.” With only four restaurants on its two block main street, Dorset has the title of “Restaurant Capital of the World!” Since the entire town has a population of around 25, it can claim more restaurants per capita than anywhere else.

If you question the title “Restaurant Capital of the World,” you should attend the “Taste of Dorset.” The size of the crowd is amazing. Thousands jam the tiny main street and boardwalks when food is served between 11 a.m. and 3 p.m. Vendors sell specialty foods, ice cream, and drinks, and the restaurants are open for sit down meals. Shops and booths display clothing, antiques, books, and craft items, while musical groups and games for the kids create a festive atmosphere. 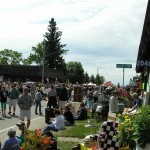 Because there is little room for parking in Dorset, most cars park along the highway and use the free bus shuttles. For bikers, the Heartland Trail goes through Dorset on a route that includes Park Rapids, Nevis, Akeley, Walker and Cass Lake. The trail once brought tourists to Dorset by rail, where they would be transported to the many resorts on the Mantrap Chain of Lakes. 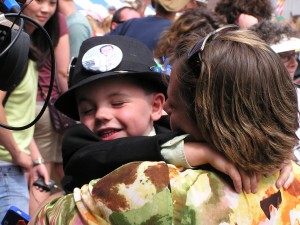 The crowd also witnessed another promotional phenomenon: the reelection of Robert Tufts to his second term as Mayor of Dorset. Robert is only four years old! He has become a celebrity known throughout the country for his showmanship and charm, and has been featured in state and national media (click here for WCCO coverage). 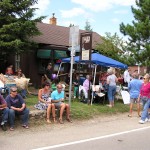 In front of Sister Wolf Books

Maybe next year, on the first Sunday in August, you can attend the Taste of Dorset. And after you’ve tasted the food, stop at Sister Wolf Books books, where many Minnesota books are displayed, including The Edge of Itasca and The Early Resorts of Minnesota.