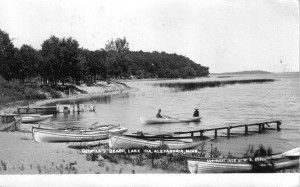 When tourist families returned each year, close friendships developed with resort owners and their families.  Other returning vacationers would often reserve the same dates and resorts became the site for reunions as well as a vacations. One family probably holds the record for continued returns to the same resort. In 1932 Walt Anderson began coming to Bedman’s Beach Resort on Lake Ida, near Alexandria. He returned each year for at least 63 years. For over 40 years, he and his family stayed in the same cabin, Cabin One.

Bedman’s Beach was one of the state’s oldest resorts under continuous ownership. It dated back to when James and Elizabeth Bedman homesteaded the land. In 1880 they opened a camp, similar to a bed-and-breakfast, for fishermen arriving by train. After roads reached the Alexandria area it became Bedman’s Beach Resort, with C. J. C. Bedman and Son as proprietors. Harry Bedman, a great-grandson of James and Elizabeth Bedman, later operated the resort with his wife, Hilda. Mr. Bedman died in 1958. Mrs. Bedman passed away in 1973. Their son, Harry Jr., and Marylyn Bedman were the last to operate the resort. It closed in 1998.

9 Responses to “Cabin One again, please.”