The Jefferson Highway: From Palms to Pines? Or Palms to Prairies?

In 1916, at the dawn of the age of automobile tourism, the Jefferson Highway became the first transnational highway in the United States. It connected existing roads between Winnipeg, Manitoba and New Orleans, Louisiana, and was advertised as the “Pines to Palms” Highway. It entered the northwest corner of the state, angled southeast to Minneapolis-St. Paul, then went south, exiting near Albert Lea, Minnesota.

The highway’s opening was marked with a sociability tour that traveled from St. Joseph, Missouri to Winnipeg. Citizens from cities along the route welcomed the tour with celebrations and parades. When the enthusiasts reached the Minnesota border, many probably expected to see their first pine trees, since Minnesota had gained fame for early logging and pine lumber. However, they saw nothing but deciduous trees covering the rolling hills and farmland. It would be more than 200 miles of dusty or muddy roads before they likely saw even one pine tree.

So where did the pines begin on the Jefferson Highway? Would Winnipeg have pine trees?

Those familiar with Minnesota’s geography knew that the pines were primarily in the northeastern part of the state. They probably knew that Winnipeg was part of the flat, treeless Red River Valley and had been labeled “The Gateway to the West” when the railroad first reached it. And of course, they knew “The West” meant the Great Plains, and in Canada, wheat fields stretching to the Rockies.

It wasn’t until the travelers were nearly 300 miles north of the Minnesota-Iowa border that they found an abundance of pine trees. This was at Menahga, Minnesota. While most of Minnesota’s original forest had already been sawed into lumber, the smaller, second growth pines were no doubt a welcomed sight, especially for those who had come all the way from New Orleans, including Louisiana’s Governor Ruffin G. Pleasant. In a welcoming speech he is credited with labeling Menahga “The Gateway to the Pines.” 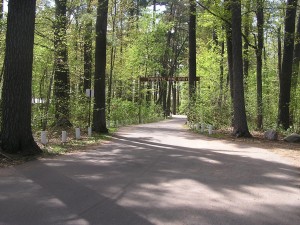 While the caravan had found pine trees (and a lake) at Menahga, another question might be asked: Were these pines the first ones that the tour group saw along the Jefferson? The answer would be: “No.” We could find at least one city that might have competed as a “Gateway to the Pines.” That was Little Falls, about 80 miles south of Menahga. It was likely that the first significant stand of pines was a 57 acre tract of land called Primeval Pine Grove Park at the west edge of Little Falls. The grove of white pines was purchased in 1907 by local citizens to preserve a sample of the original trees that once covered the central and northeastern part of the state. It is one of the few stands of old growth white pine remaining in Minnesota.

Traveling north of Little Falls, the Jefferson Highway travelers would have noticed over the next 20 miles, pines in small groves near Darling, Randall, Cushing and Lincoln. However, the hilly terrain quickly receded into flat farmland. Had the highway used the original draft that followed the railroad to Thief River Falls, the caravan would have possibly not seen a large pine tree beyond Little Falls. Fortunately, a route was chosen that turned northward at Wadena.Twenty miles north of Wadena, second growth trees, most likely jack pines, would appear along the highway. After another 30 miles, the travelers’ eyes would widen, as they experienced the huge old growth red and white pines in Minnesota’s Itasca State Park. Traveling north beyond the park’s boundary, they would see second growth pine for another 50 miles until reaching Bemidji. Then, as they headed northwest to Winnipeg, the pines would gradually change to aspen, then disappear into flat prairies as they passed the remnant beaches of ancient glacial Lake Agassiz.

Today if you followed the original route of the 1916 Jefferson Highway in Minnesota, you wouldn’t have to travel 300 miles to see numerous pine trees. Because of private and public tree planting and windbreaks, pine trees can be found lining highways throughout Minnesota, often in areas where pines weren’t seen in 1916. For today’s tourist however, roadside planting portrays an illusion of a Minnesota covered with pine trees.

The above photo shows a slab from a white pine cut in 1975. Frank Mitchell and I use it to advertise Jefferson Highway presentations. The grove that contained this tree would have been visible to the 1916 sociability caravan as it exited Little Falls, MN (click to enlarge).