Deer have been an important part of Minnesota’s scenery since the forests were first opened by logging. They have proliferated along areas of forest and open meadows throughout the state. Antlers and mounted heads adorn lodges and cabins and have always matched the rustic flavor of log buildings. For some early resorts, the summer resort calendar extended to the annual deer season.

Deer received extraordinary attention throughout the state in 1945 when the 32,000 acre Itasca State Park was opened for deer hunting. Until then, hunters could only hunt up to a “Limit Line,” which was a marked trail a half-mile from the boundary. Without hunters or predators, the deer herd had grown so large (estimated at 3,000) that almost a third were starving. Wolves, which might have controlled the population had been greatly reduced between 1927 and 1930 when 38 were removed by park trappers. Any new pine seedlings in the park were being eaten or deformed by foraging. Some of the deer had become so accustomed to people they were almost tame. 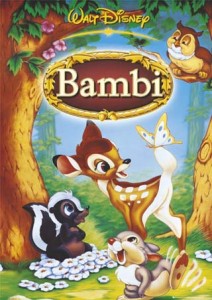 The high deer population and the tree damage created much controversy, since many locals doubted the deer counts. Businesses nearby opposed a hunt since the large deer herd attracted tourists, many of whom were no doubt charmed by Walt Disney’s animated film Bambi, first released in 1942. Those against opening the park believed that any starving deer could be saved with hay or by moving them to other locations; a deer hunt would be a “slaughter.” Finally in 1945 the legislature set the 9 day hunting season.

On the first day a continuous barrage of rifle shots could be heard from inside and around the park. Part of this was due to the number of deer, and part may have been because of bad shots by inexperienced hunters. Open sights on old rifles and shotguns with homemade slugs also resulted in many shots missing their targets. (This was as WW II was ending and new guns and ammunition were scarce.) My uncle counted seventeen hunters pulling deer along an opening near the south edge of the park near our resort. John Dobie, an early park forestry and fisheries expert, wrote in his book The Itasca Story that 2,015 deer were reported killed in the park by hunters in 1945 (an average of over 40 deer per square mile). In 1946, Dobie states only 115 deer were killed.

The first Itasca deer hunt demanded a harsh and realistic attitude toward the park’s deer herd numbers, tree regeneration, and the role of hunting.