Deer hunting was often included in early resort advertising, especially in the 1930s. It was the unofficial late closing of the tourist season. In 1945, my father decided to capitalize on Itasca State Park’s first deer season by adding a bunkhouse for deer hunters to our small resort near the park boundary. It contained about a dozen bunks made from 2 X 4s, and several cots. Hunters, especially from the Fargo-Moorhead area, stayed in the simple building. Nearby resorts overflowed with optimistic hunters, and many local families opened their homes to the vast numbers invading the woods. My mother hired a friend, Mrs. Gene Ferguson (Jessie), to help her and my young sister Betty prepare meals for the scores of hunters who came to eat at our store.

The first Itasca Park deer season, described in Part 1, was a “boom, boom, then bust,” but our bunkhouse held returning hunters each season for several years. We became familiar with their unique nicknames and personalities. I was “hired” to sweep the floor, carry water, and keep the barrel stove supplied with wood. Each morning I looked for loose change that the men dropped during their late night, loud, poker games when more than enough bottles of Old Crow and Hamm’s were consumed. 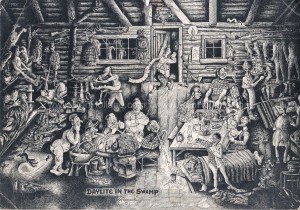 My dad bought a super-sized postcard that reminded him of our bunkhouse hunters (except for the meal preparation). He tacked it on a wall in our store and it always drew a laugh from men. Women smiled, but I think they viewed it as crude and uncouth. The card was created by Norman Pettingill, a part time hunter, fisherman, and trapper from northern Wisconsin. He made numerous primitive ink drawings that covered all kinds of backwoods topics, selling his strange cartoons as 7 X 10 inch postcards. I kept the card in my memorabilia collection and a copy hangs in our hunting camp. A scan of Pettingill’s postcard, “Daylite [sic] in the Swamp” is shown here (It is not reproduced in my books). It probably draws the same comments today as it did in 1947!

I grew up around deer hunters, and deer hunting has become part of a family tradition–a tradition that includes old friends and neighbors, all sharing delicious food, a variety of drinks, exaggerated stories, and photos to reminisce about past seasons. Each autumn our family joins approximately 475,000 recreational deer hunters, who help balance the state’s deer herd numbers, enjoy Minnesota’s outdoors, and provide a 260 million dollar economic boom to Greater Minnesota businesses and resorts before the big chill of winter arrives.

3 Responses to Early Deer Seasons, Part 2: Daylight in the Swamp