From Tom’s to Kee-Nee-Moo-Sha: What’s in a Name?

The Early Resorts of Minnesota covers resort development from the first ones along the lower Mississippi in the 1860s to the entire state in the late 1950s when resorts were nearing their peak in numbers. Resorts that were operating at the time of writing are listed if they began before 1960. If they were bought and sold several times within a decade, some owners names may have been missed.

Tom’s Resort on Cass Lake was one that I overlooked–even though it existed for fifty years. It was developed in the late 1950s and continued until 2006, shortly before I started writing my book. It began almost too late to be considered an “early” resort. It must have been a popular resort. According to the Bemidji Pioneer Press, of March 3, 2006, Tom Accardo, the owner, was a professional baseball player with the Chicago Cubs organization from 1939 to 1954. In 1956 he started Tom’s Resort and it became one of the largest in the area, with 30 cabins, a restaurant, a bar, a pool, and a harbor.Tom became known as a cordial owner, a fisherman, a guide, and a cook. He passed away in 2009 at age 86.

Tom’s Resort had a simple and straightforward name. It certainly was easy to pronounce and easy to remember.

But what makes a good name for a resort? If you had an imaginary resort, what would you call it?  Here are photos of four resorts with unique names (click to enlarge, click on the back arrow to return to this page). 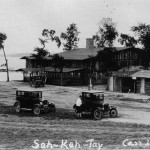 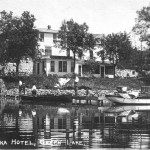 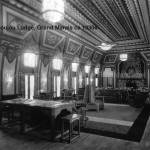 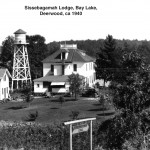 (Note, highlighted names below are links to resorts that still operate, or are museums)

Some names were quite creative in portraying a sense of uniqueness and humor: Camp Kool and Camp Delight; Train Bell and Luck-E-Strike; Clark Gable’s Resort and Isle O’ Dreams are examples. Others included Margie and the Bear, and Jack the Horse; Duck Inn and Mosquito Heights; Empty Bar and Laf-A-Lot Cabins; Teepee Tonka and Kola Tepee Lodge; I-O-Way Motel and Oma-Hawe’s Cabins; Cee-Es-Ta and E-Z Duzit;  Igo-Inn and In-We-Go; Dunrovin, Dunwurkin, Do Come Inn, and Rest-A-While; Idle Hour Cottages, Picture Window Resort, Baker’s Acres, Ro-Be-Doe, the White House, and Back O’ The Moon–all having a certain lighthearted quality.

I wonder–why would a new owner change a name that was well known? Some of course had poor or insulting names to begin with, and usually they were changed when sold. Others had family names, which obviously would change. But resorts that kept their names over time made their histories easier to trace. By retaining a stable name, resorts could change ownership without changing signs and advertising, thus providing past guests and future generations of tourists an easy reference. Maybe names change because people simply want their own identity, even if it means years of promotion ahead.

Tom’s Resort was sold and no longer operates as a resort.  The property is now called “Tom’s Harbor,” with individual lots for sale as part of a lakeshore association. Tom must have been a special person to have his ordinary sounding name continue under new ownership and in a new age. It would have been easy to change it to Silver Harbor, or Cool Harbor, or Pine Harbor. But the new owners kept his name. They probably knew he played a role too important in the resort’s history to allow it to disappear.

Hundreds of unique resort names can be found in The Early Resorts of Minnesota. If you know of an early one that “slipped through the cracks” and wasn’t mentioned in my book, click here to let me know. Perhaps send me some of its history or some photos. Check the maps on this website first. You might find it hidden under another name.