Hunting for the old Jefferson Highway 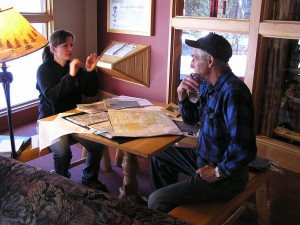 On a frigid January 6 morning, Frank Mitchell and I met with Itasca State Park Naturalists Connie Cox and Sandra Lichter at the Brower Visitor Center in Itasca State Park. (The temperature warmed to minus 20º F for our 10 a.m. meeting.) Our purpose was to study old maps that might help in tracing the route of the old Jefferson Highway that once wound its way around the hills and lakes of Itasca Park.

The highway, designated in 1916, was the first north-south transcontinental highway in the United States. It connected New Orleans, Louisiana with Winnipeg, Manitoba. Frank and I grew up together along visible remnants of the original Jefferson Highway.

What makes the highway interesting to study is that it was not built as one highway, but was made up of selected local existing roads and trails. Over the years the route was straightened, leveled, and shortened as newer city, state, and federal highways were designed along and over the original route. As a result, many segments of the Jefferson Highway were renamed. Some routes were abandoned to become local trails while others disappeared, overgrown with brush and trees.

With the information gained from our meeting, the four of us will be better prepared when the Lake Country Scenic Byway hosts the Third Annual Jefferson Highway Association’s International Conference. The Association has selected Park Rapids, Minnesota as its 2014 Conference site. Frank was instrumental in steering the Jefferson Highway Association to Park Rapids. The conference will be held on May 30 and 31. Members and citizens in and near Itasca State Park, Park Rapids, and Menahga, as well as surrounding communities will be preparing for the event. Connie and Sandra will be organizing the Conference bus tour of Itasca Park, along with other activities, and I will be one of several presenters at the C’mon Inn in Park Rapids.

Membership in the Association is open to anyone interested in the Jefferson Highway. Membership forms are available on the website.

This entry was posted in All blog entries, EDGE OF ITASCA stories, Jefferson Highway, Minnesota Tourism. Bookmark the permalink.

2 Responses to Hunting for the old Jefferson Highway