I recently presented Jefferson Highway programs for the Wadena County Historical Society’s Spring Lecture Series and for the Northern Exposure to Lifelong Learning in conjunction with the Clearwater County Historical Society. I was surprised at the number of people who lived along the old Jefferson route and wanted to know more about it. The Jefferson Highway was a series of connecting local roadways that zig-zagged on township roads or wound around hills and marshes from New Orleans to Winnipeg. 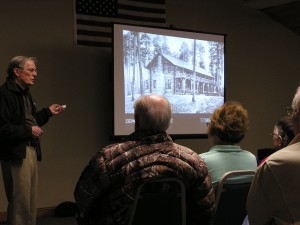 Ren showing an early photo of Itasca State Park’s Douglas Lodge to the seventy-five who attended the presentation at Gonvick. While the lodge was built in 1905, few tourists saw it until the Jefferson Highway arrived in 1916. (click to enlarge)

While only a few might be around who might remember the first cars on the roadway 100 years ago, there are many who can remember casual references to the name “Jefferson Highway.” And while we can find plat maps and tourist brochures showing stretches of it, those documents do not provide enough details to tell us where the route might have actually existed locally. Short cuts and improvements–with layers of gravel, cement, or tar–altered the route as the state and national highway numbering system came into existence. Only a visual appraisal of the landscape can give us clues to find the surviving evidence of the original roadway. Local residents are often best at figuring out this puzzle in each community. Individuals at both presentations could describe remnants of the route on or near their property. 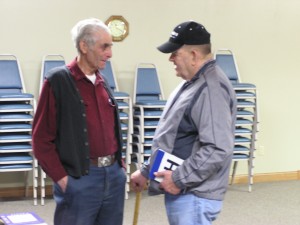 Frank Mitchell talks to David Wilander about the Jefferson Highway route through Becida, Minnesota. The route was abandoned when U. S. 71 was designated in 1926. David holds one of ten wooden blue,black, and white Jefferson Highway signs that Frank made and distributed as door prizes. Frank has lived along the Jefferson Highway all of his life and shares a unique family history that astonishes those who are fortunate to speak with him about it. (click to enlarge)

For more information on the Jefferson Highway, click on any of my three previous blog post links below:

Hunting for the Old Jefferson Highway

You can also click here to learn more about the Jefferson Highway Association.