Sebago Camp didn’t match the style and size of some of the other early Brainerd area resorts. Located on the north side of Round Lake near Nisswa, it was quite small and isolated. But due to an incident in 1933 it found a big place in Brainerd’s history when some late summer travelers wandered in. They told owner Clarence Penney that they were land speculators and needed a place to stay. The mysterious guests stayed for several days in Cabin 2.

Penny would soon learn that the First National Bank of Brainerd had been robbed by a five-member gang that fired shots into buildings in downtown Brainerd, narrowly missing several citizens. Penney recognized two of the five when the ST. PAUL PIONEER PRESS published photos of the suspected robbers. One was the notorious Baby Face Nelson, another his red-haired girlfriend. Sebago’s Cabin 2 had been their base for planning the October 23, 1933 robbery. 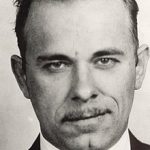 Donald E. Fish, a caretaker at Sebago Resort, wrote a short book titled, Sebago Resort: A History 1926-1986. He believed that John Dillinger may have been one of the gangsters who planned the robbery. His opinion was based on finding “Dillinger and Pals” written beneath the seat of a cabin chair. Dillinger had escaped from an Ohio prison on October 12, 1933, eleven days before the robbery, thus may not have wanted to attract attention by physically participating in the actual robbery. 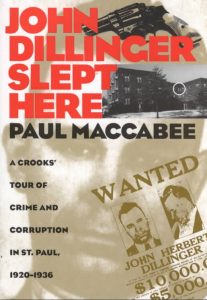 Many resorts have tales about gangsters, especially from the days of Prohibition when gangsters frequented Minnesota. Dozens of books have been written about John Dillinger, including Paul MacCabee’s John Dillinger Slept Here, a detailed history of Dillinger in St. Paul.

John Dillinger, whether sleeping, sitting, or running from the law, was considered an extremely dangerous bank robber who caused fear, injury, and death to many innocent people. It would be interesting to know if he really sat in the chair at Sebago Resort, or why his name was signed like a celebrity. He certainly wouldn’t have written his name to achieve identity, since he already had plenty of that. Maybe he felt “left out” of the action, or maybe just bored. Had somebody who later rented the cabin “signed” the chair to fuel one of the many Dillinger stories? We may never know for certain, but we do know that Sebago Resort has a story that will never die.

If you’d like to share stories or images from early resorts, click here to submit them for consideration and we may be able to include them in this blog.

To learn more about early resorts, The Early Resorts of Minnesota will be available in late September at your local bookstore or by ordering from this site.

(Both FBI mug shot photos above are courtesy of Wikipedia)