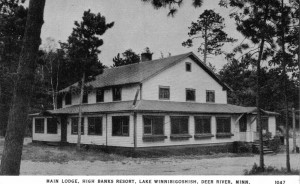 In 1957 Art Lyons, a fishing guide working out of High Banks Resort on Lake Winnibigoshish, hooked a large muskie. After an hour-long fight that drew the attention of boaters and resort bystanders, the fish was finally landed and brought to shore. It weighed fifty-four pounds and was fifty-six inches long. This was just short of the 56 lbs. 8 ounces state record which belonged to a 1931 muskie caught in Lake of the Woods. Art’s huge muskie was mounted and eventually hung on a wall in a bar at Bena.

Nineteen years later, in 1976, the Lake of the Woods record muskie was disqualified because it was found to have been caught across the border in Canada. Hooray for Art! That allowed him, High Banks Resort, and Lake Winnibigoshish to claim the state record for the largest muskie.

Unfortunately the fish, with its new title and celebrity status, was seen for only three years; the bar in Bena burned, along with Art’s record fish. A replica of the huge fish can be found in the Minnesota Fishing Museum at Little Falls, Minnesota. Click here to see a photo of Art Lyons and his record muskie on the High Banks website.

Will Art Lyon’s 1957 record ever be broken? Some believe it and are still working on their 10,000 casts for that dream muskie lurking along the shoreline of Lake Winnibigoshish.

High Banks Lodge is located 12 miles north of Deer River. In 2012 it had twelve cabins, a grocery store, a twenty-foot cocktail bar, and a restaurant. Owners are Rick and Kim Leonhardt. For more information, visit their website at:

If you have a story from one of the early resorts, click here to submit it for consideration and we may be able to adapt it to this site.

If you wish to know more about early resorts, The Early Resorts of Minnesota will be available in late September at your local bookstore or by ordering from this site.