This year the Civilian Conservation Corps (CCC) celebrated its 80th anniversary. It began in 1933 when it was signed into law by Franklin D. Roosevelt as part of the Federal Government’s effort to raise the economy from the depths of the Great Depression. Until 1942, the CCC put thousands of young volunteer men to work in conservation projects on public lands and parks. 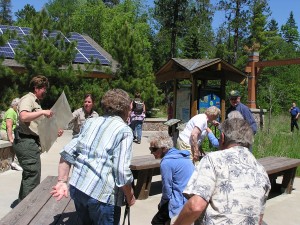 Special events by various agencies are celebrating this anniversary throughout the year. On June 18 I attended a special CCC recognition luncheon and program at Forest Inn at Itasca State Park. The Inn was one of the beautiful buildings built in state parks by the CCC boys working with experienced veterans. The photo shows Itasca Park Naturalists Connie Cox and Sandra Lichter setting up part of the CCC program at the Mary Gibbs Mississippi Headwaters Center. Special guests attending were original CCC members and spouses. The group toured some of the CCC projects in the park, including the Mississippi Headwaters with its famous boulders, one of the most visited natural tourist attractions in the state.

More information on structures created through Federal work programs is at: