The first quarter of the nineteenth century found the citizens of the United States busy clearing land, building structures, and expanding the western frontier. Half the country was considered wilderness. There was little opportunity or means for citizens to travel for pleasure.

But when steamboats began appearing in the 1820s, they freed the nation to travel the rivers of the eastern interior, and by the 1850s, railroads began to open the West. While the European traveler looked for classic literature, music, art, or architecture, those who made the big decision to come to America, sought the beauty and adventure of the raw land that called, and because of Minnesota’s location on the Mississippi River, it became the focal point for the nation’s first wave of tourists.

The Grand Excursion up the Mississippi

In 1854, the first rail line connecting the Atlantic Ocean to the Mississippi River was completed between Chicago and Rock Island, Illinois (click here to read more about the first railroad engine to reach the Mississippi). To celebrate the accomplishment, the railroad and its contractors proposed a special combined rail and steamboat publicity tour. It started out as a simple affair, but soon flared to national attention. Major eastern newspapers publicized it and sent journalists to Chicago for the tour. Soon many celebrities, church and education leaders, business representatives, artists, writers, and politicians became involved, including a former president, Millard Fillmore.

After a rail trip from Chicago to the new terminal at Rock Island, the highly publicized tour group, estimated at 1200, transferred to five steam-powered paddlewheelers for a luxury ride up the Mississippi to St. Paul (estimated population only 4,000 to 6,000 at that time). It was labeled the “Grand Excursion,” and it was the first time a large group of tourists visited Minnesota. One guest described the service on the steamboats:

“Morning, noon and night a table was spread, that in most of its appointments and supplies would have done honor to our first class hotels, and its confections would not have disgraced a French artiste with all the appliances and means of a French cuisine.”

The travelers were awestruck by St. Anthony and Minnehaha Falls (photos below), Lake Calhoun, the vast beauty of Lake Pepin and the southern Minnesota bluff country. Upon their return home, their excited stories would trigger the first wave of tourism to Minnesota, and within two years, 56,000 tourists visited St. Paul in a single season. 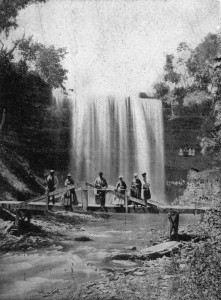 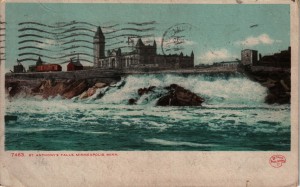 “In the years that followed, hundreds of excursions were made to this garden spot of the West. Solitary travelers, tired business men and their families, private parties, various religious, political, and social organizations, made pilgrimages to this Mecca of the upper Mississippi…Probably no other single factor was so Important In popularizing the fashionable tour with Easterners as was the grand excursion of the Rock Island Railroad in 1854.”

While the first grand excursion of tourists used steamboats as floating hotels, the route would eventually see permanent hotels and businesses in the new cities along the Mississippi. Frontenac and Wabasha were two of these early cities. 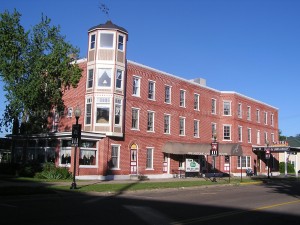 The city of Wabasha, on the south end of Lake Pepin, was established in 1830 and is believed to be one the oldest towns on the upper Mississippi River. B.F. Hurd built a hotel in 1856 known as the Hurd House. Its name was changed to the Anderson House in 1909. Except for a brief period in the recent recession, the hotel has been continuously open. Click here for information on Wabasha lodging and activities. 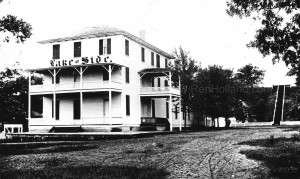 Lake Side Hotel, Frontenac, Built around 1859 (click to enlarge)

The Lake Side Hotel (Frontenac Inn) on Lake Pepin was built about 1859. It is considered Minnesota’s first summer resort hotel. Early Frontenac became known as the “Newport of the Northwest.” (Newport, Rhode Island, bills itself as “America’s First Resort.”) The building was first used as a grain warehouse, then as a store. It became a hotel in about 1865 and is one of the few hotels that has survived from the steamboat era. It is vacant and in danger of being lost.

By the late 1800s, steamboats and riverside hotels lost their popularity on the Mississippi as railroads became dominant.  But the “floating hotels” had made their impact on Minnesota by spawning a tourist industry that continues today.

If your have a story about early Minnesota tourism, click here to contact me. We may be able to include your story in a future blog post.