The 66th Minnesota Governor’s Fishing Opener at Park Rapids celebrated the beginning of the 2013 tourist season on May 10. It is now history, and will go down as unique because of ice covering the major lakes in the northern third of the state.

The tradition of the Governor being involved in the fishing opener had a nebulous beginning, and not all governors attended. According to the Minnesota Historical Society, Governor Elmer L. Anderson is credited as starting it in its present form. The titles “First Annual Fisherama” and “Governor’s Fishing Party” were replaced with “Governor’s Fishing Opener” by Governors Rudy Perpich and Al Quie. 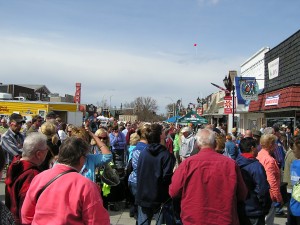 Cities take the hosting honor very seriously, as shown in the most recent one at Park Rapids. The double wide Main Avenue was cleared of its center parking and cars were replaced with tents containing various games, live music and entertainment, product displays, food and drinks, etc. 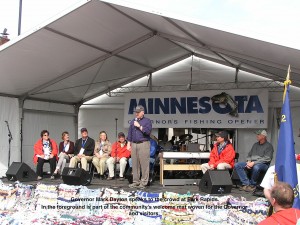 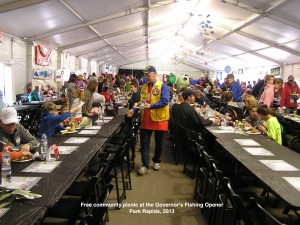 A free dinner of pulled pork, beans, French fries, fruit, soft drinks, and ice cream was provided inside a giant tent that filled a short block on Second Street. A professional fireworks display ended a fun-filled day of activity before the midnight opener. The Governor and his party fished on the open Fish Hook River with fishing guide Jason Durham. Governor Dayton caught a walleye shortly after the season began. 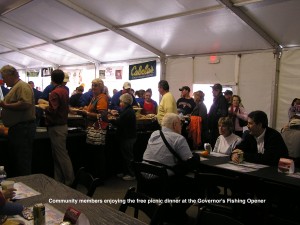 I was amazed by the crowd, as well as the organization and planning involved in successfully presenting this special event; the Park Rapids area citizens, organizers, and participants should be proud.

The 2014 Governor’s Fishing Opener will be hosted by the Brainerd Lakes Area Chamber of Commerce. Grand View Lodge will serve as event headquarters.