Paving the way for Tourism: The Historic Jefferson Highway

U. S. Highway 71 was less than 100 feet from my parent’s store and resort at Little Mantrap Lake, near Itasca State Park. This heavily traveled highway has been an important tourist route to, and through, Minnesota since 1926. It links the Gulf of Mexico (near Baton Rouge, Louisiana), to Canada, (at International Falls). As a young boy, I was not aware of the history of Highway 71. I didn’t know much about it until I started writing late in life, and found that the section that passed our resort had previously been State Highway 4, and before that, part of the historic Jefferson Highway, reaching back to 1916.

In recent years there has been a surge of interest in the Jefferson Highway. The highway linked New Orleans, Louisiana to Winnipeg, Manitoba, and was created to improve access to the interior and northern parts of the United States. While it crossed the nation, it wasn’t constructed by the federal government. Instead, it linked existing local roads between small towns, with each one paying a share of the costs. Honoring Thomas Jefferson, the route roughly followed the eastern boundary (Mississippi River) of the Louisiana Purchase.

The original planning stage of the Jefferson Highway created strong competition between each town along the proposed route, since the highway would facilitate significant tourism and commercial traffic. Political influence from individuals and towns became a heavy factor in its design, and as a result a zigzag highway, with a sometimes confusing pattern emerged in the plan.

In 1916, after nearly omitting one of the great tourist attractions in the state and nation (Itasca State Park’s Source of the Mississippi), the route was finalized. Using today’s highway numbers, the Jefferson Highway would approximate these routes in Minnesota: From the Iowa border near Albert Lea to St. Paul–today’s Interstate 35; from St. Paul to Wadena– today’s U. S. 10; from Wadena to Bemidji–today’s U. S. 71; and from Bemidji to Winnipeg–today’s U. S. 2 and U.S. 59.

The lucky towns chosen welcomed travelers with celebrations and convoy-like “sociability runs” connecting the segments. Towns bypassed by the Jefferson route were disappointed; they saw that many towns selected were already served by railroads, and that the Jefferson really didn’t open much new scenery to visitors. In addition, railroad towns wielding the most influence were often agriculturally based, and not especially appealing to tourists. The result was  immediate political pressure to build new state highways into the undeveloped and scenic areas.

The Jefferson Highway initially provided a tremendous boost to the nation’s emerging automobile industry, its highway system, and tourism. For Minnesota, it was nearly the equivalent of the Grand Excursion of 1854, which linked the eastern railroads with the Upper Mississippi steamboat traffic to St. Paul, focusing national attention on Minnesota’s scenery.

In looking back to my boyhood, finding the Jefferson Highway was a historical bonus. The tourist traffic I saw cruising by my parent’s resort on U.S. Highway 71 in the 1940s and ‘50s had been preceded by the sputtering Model Ts, Paiges, and Packards driven by the pioneer tourists following the curves and hills of the historic 1916 Jefferson Highway, North America’s First Transcontinental International Highway. (See attached photo.)

History sometimes becomes more interesting and less confusing if you can relate it to your own life. Maybe YOU were born, raised, or live along the historic route of the Jefferson Highway! Even though nearly 100 years have passed since the first automobiles traveled the Jefferson route, some of the original twists and turns of the roadbed may still be visible. Look for terrain where horse-drawn wagons might have traveled (circling lowlands, along higher ground). These would likely have later become routes that early automobiles traveled before modern equipment straightened, filled, or leveled the original roadbed. 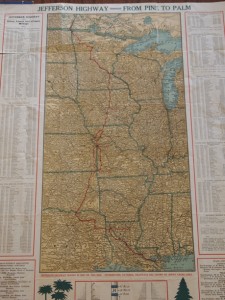 Google Earth can help zero-in on some of the sections of the Jefferson route. Art Warner from the Morrison County Historical Society has used it in tracing the route from south of Cushing, MN to Lincoln, MN, converging on some of the original roadbed. In 1919, a Palm to Pine Sociability Run went the entire route of the highway, with celebrities from various towns involved (map shown on the right).

Check out the Jefferson Highway Association for more information on sociability runs being scheduled for 2015, celebrating 100 years since the first planning meetings for the Jefferson route.

1 Response to The Jefferson Highway