(If desired, click on any image shown to enlarge it, then click the back arrow to return to this blog.) 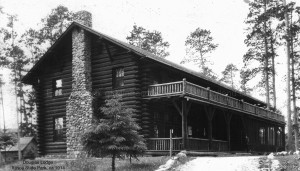 The Rustic Style of Architecture played a significant role in the building designs of Minnesota’s tourist related facilities, first in our state parks, then in private lodges, resorts, and lake cabins. It was characterized by structures made of native logs and stone that blended with their natural landscapes (as opposed to refined lumber and nails, or bricks and mortar). The style’s beginnings can be traced first to the chalet architecture in the alpine regions of Europe, then to the Adirondack style of architecture in New York in the 1850s. It spread westward with the early railroad hotels in Yellowstone, Glacier and Grand Canyon National Parks. Old Faithful Inn at Yellowstone Park was built in 1904. The following year Douglas Lodge at Itasca State Park was built, which is considered the first example of the Rustic Style in Minnesota. It was designed by Clarence H. Johnston, Sr., a state architect who designed numerous buildings for colleges, correctional facilities, and hospitals, as well as private residences. The lodge was constructed by Thomas and Samuel Myers of Park Rapids. 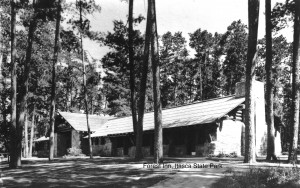 The style had universal appeal, since each region of the country could incorporate its own features of culture, terrain, surface materials, and vegetation in structural designs. While local materials for buildings had traditionally been used by pioneer settlers since the beginning of our country, those early buildings were usually simple and sometimes crudely built due to economic necessity. The Rustic Style introduced thoughtful design and aesthetics, working in harmony with the natural landscape. 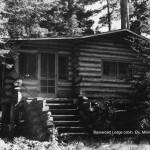 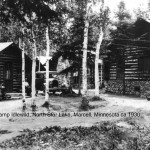 After 1920, the National Park Service and National Forest Service adopted a policy to use rustic design in park and national forest structures. In Minnesota, resorts which received permits to build in the Chippewa National Forest have many Rustic Style buildings from this period. Other resort owners followed the examples by using the Rustic Style in constructing their lodges and cabins, especially in the northern regions of the state. 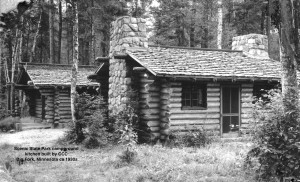 During the Great Depression of the 1930s, the labor intensive Rustic Style was incorporated into the federal relief programs in state and national parks and forests. In this period some of the most beautiful rustic structures were built by the Civilian Conservation Corps (CCC) and the Works Progress Administration (WPA). Fireplaces, gates and fences, picnic shelters, stairways, incinerators, comfort stations, pump houses, drinking fountains, bridges, benches, and signs–all became subjects for the Rustic Style. Private sector lodges emphasized open beams and split-rock fireplaces, with interior furniture made from tree gnarls, branches, logs, and willow. Antlers and mounted heads, furs, and leather were used in lodge and cabin decor. 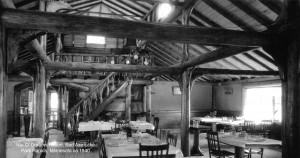 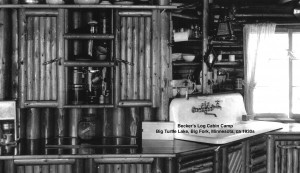 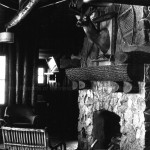 After World War II, with more visitors traveling to parks, the National Park Service moved toward a more efficient and economical type of architecture, and the pure forms of the Rustic Style were discontinued. Modern construction practices, increased labor costs, and new materials and equipment became factors in forging a new style of rustic design. 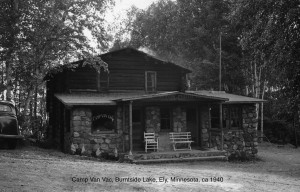 While we can still find beautiful original examples of the Rustic Style, they are becoming rare because of fires and deterioration. New structures in the old Rustic Style are still being built, but not in national or state parks, and on a much smaller scale in private sector resorts.

In a later blog entry, we can look at some of the more recent modern rustic design in resort buildings.