And Then There Were None

Recently I had two opportunities to take pleasant steps into the past. One was by visiting my favorite sites at Itasca State Park; the other was to look for the site of an early resort near Park Rapids. The occasion developed when my wife’s high school classmate and longtime friend Kay visited us for an annual get-together in Little Falls. Kay’s brother Dave acted as her chauffeur since health reasons prevented Kay from driving. With nothing specific to do, Dave had hoped to visit Itasca State Park, as well as to possibly find “Erve’s,” a former resort on Little Sand Lake, near Dorset. As a young boy, he had spent several summer vacations at the resort with his family.

Dave taught architecture at Iowa State University in Ames, Iowa, and is now retired. I had not met him before, but we got along immediately and shared similar interests. I knew he would be especially interested in the rustic and Civilian Conservation Corps (CCC) era architecture at Itasca State Park. I looked forward to showing him Itasca’s historical architectural showpieces, including Douglas Lodge, Forest Inn, and The Old Timer’s Cabin. And of course, he wanted to cross the Source of the Mississippi on the slippery rocks.

Douglas Lodge, built in 1905, has a rustic log style adapted from the buildings of the National Park Service (photo below). It is always exciting for me to visit it as well as to see the old growth red pines that I played under as a young boy. We followed a path from the lodge down to Lake Itasca, then along the shoreline over a walkway until we reached one of the most unique cabins you will ever find: The Old Timer’s Cabin. It was the first one constructed by the CCC in 1934, with logs so huge, only four were needed to reach the eaves (photo below). 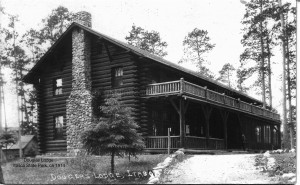 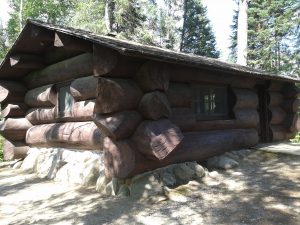 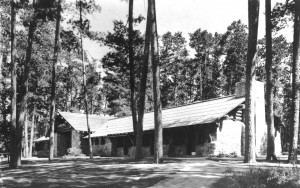 Forest Inn, across the road from Douglas Lodge, is probably one of the best examples of 1930’s Depression Era architecture (photo on left). It is worth your time to go inside to shop (my books are sold there) and to examine the beautiful and unique way wood, stone, and iron can be combined to blend with the natural environment. It was built between 1939 and 1941 by the Veterans Civilian Conservation Corps, who were highly skilled in working with logs and stone. 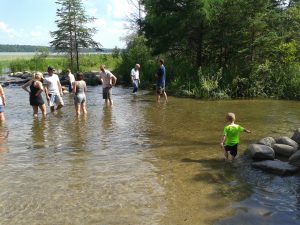 The well-worn path winding from the Mary Gibbs Headwaters Center down to the Source of Mississippi is always rewarding. Just watching those nearing the end of their quest of crossing the stream is fun. Someone is always getting wet trying to step from stone to stone to “walk across the Mississippi.” (This year, the stones and banks will be readjusted for the first time in 80 years to keep the river from expanding around the ends of the boulders and to help prevent injuries from slipping.) (Photo on right.)

After returning to Douglas Lodge for a delicious dinner of Red Lake Walleye, we made our way to Little Sand Lake in an attempt to find “Erve’s Resort.” By chance, we chose one of the many similar driveways leading down to the hidden lake. As we approached a steep grade, Dave began to recognize what had once been the site of his summer fun as a boy. Only one of the original log buildings remained. We parked the car, then trespassed a little to get to the shoreline. We visited with a young couple, one of several who vacationed in summer homes. Their school-age children and friends were at the dock, enjoying the water, said to be the cleanest and clearest in Minnesota. The scene, on the site that had once been Erve’s Resort, brought back many fond memories for Dave.

What about the other eight Little Sand resorts of the 1950s–Norton’s (Greendale Resort), Shoreham, Camp Mirimichi, Wingard’s, Anglers Wood, Northern Star, Paulette’s (now Zorbaz Restaurant), and Little Sand Lake Resort? Not a single resort is advertised for Little Sand Lake. None. Their demise is likely attributed to the spike in real estate values, fueled by demand for the lake’s high-quality water and sandy shoreline.

Those of us who would like to visit the family resort that we enjoyed as a child or as a new parent, might prepare for a disappointment: The resort may no longer exist. There are less than 800 remaining of the nearly four thousand resorts that existed in the peak years of the 1950s and 1960s. We would be lucky to find one of the few that has persisted, flourished, and perhaps even retained some of their characteristic historical structures.

Fortunately, our country has state and national parks, as well as historic and natural landmark recognition. They can provide stability and an enlightening step into the past by preserving natural features and architecture that will likely be there whenever we return. 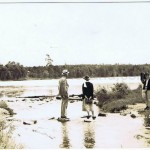 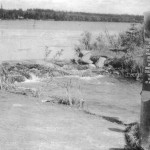 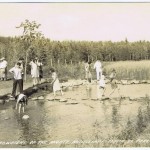 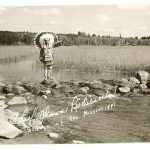 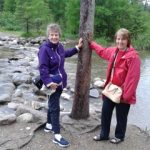 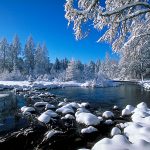 3 Responses to And Then There Were None