One of the worst fears in operating any resort must be to one day see flames coming from a structure. If a plan of action was in place, it might be saved. If not, the owners would see the fruits of their labor go up in smoke, similar to so many other early resorts that suffered devastating fires–some occurring more than once. It seems odd that so many great resorts burned to the ground when most were located near vast amounts of water available to stop the fires. But losing control of a fire might easily happen if a fire was not discovered early, or if those present lacked training or extinguishers to act quickly. If water was not available immediately through reserve tanks or pumps and hoses, the nearby lake water would be useless.

There were many causes of resort fires. Historically, resort buildings have been constructed of logs and lumber, providing ideal fuels for fires. Heating systems were often dependent on wood stoves which could easily overheat or create dangerous levels of flammable creosote in chimneys. Fireplaces added northern charm, but flames, hot ashes, and sparks posed a constant danger. Gas or kerosene lamps and lanterns could easily ignite material if tipped or placed below shelves or near ceilings. Unattended kitchen stoves ignited food and grease, and careless use of cigarettes and pipes created fires in beds and sofas. Stick matches were common and were easily ignited by children. Generators used for creating electricity meant transporting highly flammable gasoline, and early electrical wiring was often installed without proper materials or training. Finally, there was always the danger of a lightning strike from a summer storm, or a careless person accidentally igniting a nearby pine forest.

Resorts today are much safer and less likely targets for fires, due largely to tougher fire safety standards, fire resistant materials, and modern fire fighting equipment. The 911 universal emergency telephone number is an advantage, but if the fires’s location is too far from the nearest fire station, the fire’s damage may be too great to save a structure.

Pictured below is one of the largest log resort structures to be destroyed by fire, Breezy Point Resort on Pelican Lake, north of Brainerd. 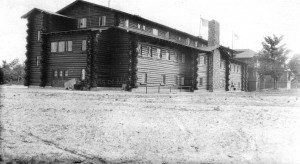 Breezy Point Lodge, 1940s (Click on picture to enlarge, click on back arrow to return to this webpage)

Wilfred Hamilton Fawcett, publicist and owner of Fawcett Publishing, acquired land in 1921 to build Breezy Point Resort on Pelican Lake. His building program in 1925 included the construction of a log lodge, one of the largest in existence at the time. It had seventy-five rooms. Advertising from the Ten Thousand Lakes Association indicates that it could accommodate 350 guests in 1925. Through Fawcett’s personality and contacts in the publishing and motion picture industry, Breezy Point Resort attracted the rich and famous, including Tom Mix, Clark Gable, and Carole Lombard. In 1926 Herbert Hotaling, Minnesota’s tourist commissioner and executive secretary of the Ten Thousand Lakes Association, stated that Breezy Point Lodge was “one of the finest log structures ever erected in the United States.”

Breezy Point burned on June 20, 1959, killing two guests. It was reported that the telephone system was destroyed before the fire was discovered, thus delaying notification to the fire department. When it arrived, it was too late to save one of Minnesota’s greatest lodges.

After many owners and changes, Breezy Point Resort has become a large modern resort and time share complex. Fawcett’s personal mansion was spared from the fire and is available for renting.

The next blog, “Early Resort Fires–Part Two” will summarize some of the resorts that were destroyed by fire. More information and sources can be found in The Early Resorts of Minnesota.