It was a pleasure to visit Duluth recently. Ida Mae and I stayed at the Fitger’s Inn. This exceptional hotel is located in the large complex that once housed The Fitger’s Beer Company on the waterfront of Lake Superior. The brewery, built in the 1880s, is listed on the National Register of Historic Places. Fitger’s was a major producer of beer in the 1940s. It closed in 1972. Historic photos and brewery memorabilia are displayed throughout the hotel. 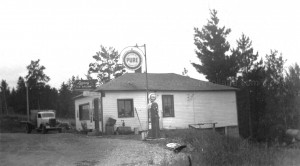 The Fitger’s truck is parked in front of our resort store in 1949 (click to enlarge).

The name “Fitger” was one of the first names I can remember. It goes back to a time when my older brother Elmer Jr. lived with us at the resort just before World War II interrupted our lives. One of my first memories of Elmer Jr. was when he drove the “new” truck into the driveway of our store. The beer truck carried a light yellow beer cooler with black lettering that I would later learn to read as “Fitger’s.”

My father and two brothers removed the cooler and used the 1936 Ford truck for hauling pulp and lumber from a small sawmill that my father owned. The cork insulated cooler would later make a good shelter for a dozen bantam chickens that were under my care as a boy. A single kerosene lantern kept it warm in the winter. Bantams, sometimes called “Banty,” are miniature chickens that lay eggs about one-half the size of those of regular laying hens.

The Fitger’s truck was used for my first driving experience–a stop and go procedure where I drove the truck and my father loaded bales of straw from fields on my grandmother’s farm in the Red River Valley. After that, I advanced to driving the logging trails on our property.

Oddly, three days ago Elmer Jr. and I talked about the Fitger’s truck during a telephone conversation. He couldn’t remember where Dad bought it, but spoke of how it was used at the resort before he entered the Navy. This conversation with Elmer Jr. would be our last. He passed away yesterday in Broomfield, Colorado at age 89, 72 years after my first memory of him and the truck. He will always be remembered as a cherished, kind, and generous brother.